Married for more than thirty years to the Senior Pastor of Emmanuel, Muriel Goode-Trufant praises God for the daily differences He makes in and through her life. A graduate of the Temple University School of Law and the University of Pennsylvania, Mrs. Trufant is the Managing Attorney at the New York City Law Department, one of the oldest and most dynamic legal offices in the world. With more than 1,000 attorneys and 800 professional support staff, the New York City Law Department ranks among the largest law offices in New York City and the largest public law offices in the United States. As Managing Attorney, Mrs. Trufant has general oversight over the Law Department’s budget, personnel and facility issues. Additionally, she serves as Executive for several litigating and operational divisions in the Department. Prior to her appointment as Managing Attorney in 2015, Mrs. Trufant held a variety of positions at the Law Department including, but not limited to, Chief of the Special Federal Litigation Division and Equal Employment Opportunity Officer.

Mrs. Trufant has served as a faculty member for several continuing legal education courses sponsored by the Practising Law Institute. She has also been a presenter at courses sponsored by the Federal Bar Council, Fordham Law School and Walter F. George School of Law at Mercer University. She is a member of the Advisory Committee on Civil Practice for the United States District Court for the Eastern District of New York.

Mrs. Trufant is an enthusiastic member of CHOSEN: The Women’s Ministry and convener of several women’s retreats and conferences.
The Trufants have been blessed with two daughters, Sharise Emmanuelle, and Toni Niara. 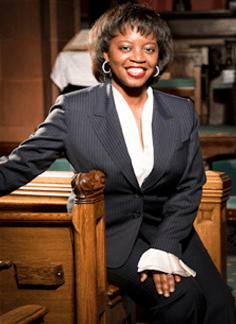